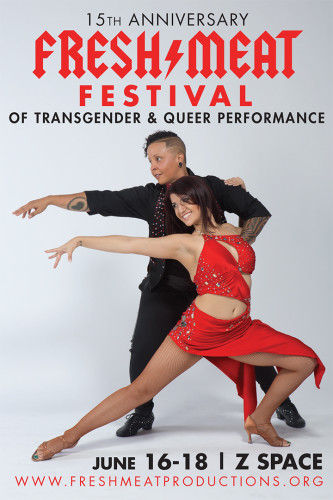 Times:
All shows at 8pm

Join us as we celebrate 15 YEARS of transforming culture, empowering audiences, award-winning transgender and queer artistry, fighting for justice, and building community … Join us for the 15th Anniversary FRESH MEAT FESTIVAL!

Transgender opera stars, North America’s same-sex ballroom champions, a gender-bending boy band, trans modern dance, gay hula, voguing, queer bachata dance and more hit the stage at the 15th Anniversary FRESH MEAT FESTIVAL of transgender and queer performance. The FRESH MEAT FESTIVAL is the only event of its kind in the US, and is celebrated for its world-class artistry and sold-out crowds.

ACCESS NOTES:
Z Space is a wheelchair accessible theater. Seating is provided on floor level for people using wheelchairs & scooters, as well as anyone who cannot climb stairs (there are stairs starting at row 2 to the back of the theater). Tickets are general seating: accessible seating will always be made available upon request at the door — it’s also super helpful if you’d like to RSVP ahead of time to production@freshmeatproductions.org

Bathrooms are wheelchair accessible and will be welcoming to all genders.

Friday June 17 performance will be ASL interpreted by Azora Telford; reserved ASL seating will be available. If you have questions or would like to request ASL reserved seating Friday June 17, please email: production@freshmeatproductions.org.

AXIS Dance Company exists to change the face of dance and disability. Based in Oakland, CA, AXIS is one of the world’s most acclaimed and innovative ensembles of performers with and without disabilities. Under the Artistic Direction of Judith Smith, AXIS has toured nationwide and internationally. AXIS was featured twice on FOX TV’s So You Think You Can Dance and has been honored with 7 Isadora Duncan Dance Awards. www.axisdance.org

Breanna Sinclairé is a graduate from the California Institute of the Arts (Bachelor of Music) and a graduate from the San Francisco Conservatory of Music Master’s Program in Opera. She is the first transgender woman to receive a Master’s Degree in the opera program at the Conservatory.  She has performed at the Academy of Sciences, Roy and Edna Disney CalArts Theatre (Meredith Monk’s Songs of Ascension), the Museum of Contemporary Art (Zachary Sharrin’s Time Bodies), Fresh Meat Festival, Trans March, and has performed the National Anthem for the Oakland A’s.

Elena Rose: A sweet-talking monster at the microphone, Elena Rose rode stories out of rural Oregon and hasn’t stopped telling them since. She has traveled nationwide as an acclaimed preacher, poet, and educator, co-curated and headlined the National Queer Arts Festival show “Girl Talk: A Trans and Cis Women’s Dialogue,” and found her work serving those who live at the edges everywhere from bathroom mirrors to law school classrooms to protest marches.

Karen Anzoategui is a genderqueer writer/performer/actor. Anzoategui’s solo show Ser! Won two LA Weekly awards, was a finalist in the DUTF in New York, and received an honorable mention as one of the best plays of 2015 by women and trans writers on the List by the Kilroys. Karen can also be seen on the Emmy-nominated original Hulu series, East Los High, as queer masculine-of-center character Daysi Cantu. www.karenanzoategui.com

Robbie Tristan and Ernesto Palma are one of the world’s most successful Same Sex Ballroom duos:  they have won many National and International titles. They live in New York and perform all over the US. Robbie Tristan is a three-time World Champion and Gay Games Gold Medalist Same Sex Ballroom dancer. His non-profit organization, Dance of America Foundation, brings Ballroom Dance projects to at risk and LGBT youth. www.robbietristan.com/ Ernesto Palma has been named Same Sex Ballroom Latin Dance Champion for 4 years, and has appeared on the the Today Show, CW11 Tyra, Rover Berdi Show, and LOGO’s The A-List. www.ernesto-palma.com/

Sean Dorsey Dance – Sean Dorsey is a transgender choreographer and dancer, and the founder and Artistic Director of Fresh Meat Productions. He is currently touring his new work THE MISSING GENERATION to 20 cities across the US. Dorsey has been named in Dance Magazine’s 25 To Watch, named “San Francisco’s Best Dance Company” (SF Weekly), awarded 4 Isadora Duncan Dance Awards and the Goldie Award for Performance. Recently, he was named in American Theater Magazine as a Top Theater Artist To Watch. www.seandorseydance.com

Shawna Virago is a transgender trickster celebrated for her striking lyric-based songs. She has been featured in publications including Bitch, OUT, The Advocate and Curve magazines, on NPR, PBS and on left-of-the-dial radio. Her writing appears in Gender Outlaws: Next Generation and in several other anthologies. She is the Artistic Director of the San Francisco Transgender Film Festival. www.shawnavirago.com

Star Amerasu / AH-Mer-AH-Su: AH-Mer-AH-Su is the music project of interdisciplinary artist Star Amerasu, whose music and art is based upon her experiences living loud and proud as a queer black trans woman. Star has performed at the FRESH MEAT FESTIVAL, at the San Francisco Pride Trans March and on the Main Stage at Oakland Pride. www.makestarfamous.com

StormMiguel Florez: there are plenty of male folk-twang Americana singer songwriters who sing about love, oppression, assimilation, and growing up an outcast in the U.S. But not many of them can say they learned to write songs at Girl Scout camp. Florez’ work has been featured on NPR, and he has toured across the US, performed with the Tranny Roadshow, National Queer Arts Festival, San Francisco Trans March and many Bay Area venues. www.stormflorez.com