Gay lives and dances to remember 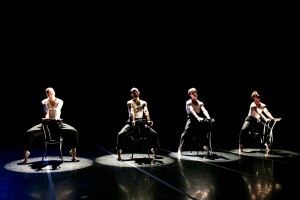 photo by Lydia Daniller
by Lewis Whittington for The Dance Journal

Sean Dorsey Dance toured The Secret History Of Love to Philadelphia’s The Painted Bride October 12 and 13, 2013. The show was met by huge audiences and a fantastic review in the Philadelphia Inquirer! “Eloquent, poignant, bawdy, lyrical…”

How perfect that Sean Dorsey’s “The Secret History of Love” landed on the Painted Bride Art Center stage during gay history month. The piece was inspired by interviews Dorsey conducted for his LGBTQ Elders Oral History Project that chronicles the life and times of gay, lesbian and transgender seniors. These are stories of self-acceptance, intimacy and the joy of gay subculture in a perilous time. All of the seniors relate incidents of harassment, public humiliation and the emotional pain of having to hide one’s identity in a staunchly straight world. A time when any expression of same-sex love, gender bending and or even meeting in a public bar could get you arrested in all 50 states.

The eloquent prologue has the quartet moving around the as the spots go off (the effect recalled David Parson’s Caught) with the dancers appearing around the stage in different positions. Then Dorsey introduces himself as a young man who is confused about how to find love. He’s not the Grindr type, so he time-travels to past decades via the voiceovers by the seniors. His dancers- Brian Fisher, Juan de la Rosa, Nol Simonse- all San Francisco freelancers, have been refining the 75-minute show and collaborating in its choreographic development for two years.

Dorsey collaborated with eight composers for an ambient, mostly instrumental score in many styles that float in and out of the narratives. The choreography is punctuated by tight rhythmic patterns in the ensemble sections; some even have a Renaissance court flavor. He also references various idioms with flair- from tango dips to muscled jump sequences. A repeated motif of two dancers in tight unison work and mid-scene a spot comes up on a third, also working the same sequence.

The various vignettes move through the decades before gay liberation of the 60s. One man narrates how emotionally profound it was for him to be in a room full of gay men during the 20s when private parties and underground speakeasies were the only possible meeting place. A woman remembers the 50s when girls rehearsed kissing boys with other girls and realizing she felt things that were more interesting to her than being with boys.

One of the most poignant among stories is that of a vet who had to hide the fact that she was secretly knew she was a woman trapped in a man’s body. She was drafted during WWII and forced to live as a male, which was traumatically against her true nature. She relates that boot camp almost broke her and she couldn’t shower with other men because it felt would be so wrong, or that she would somehow be what was then considered a mentally illness. Somehow, she survived the experience. Her story segues into tropes of gay soldiers showing silent allegiance and camaraderie during war. 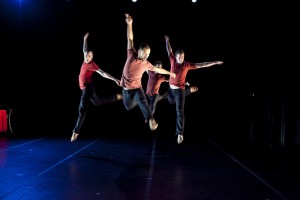 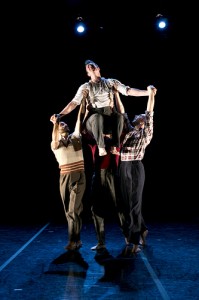 “Secret” is not all somber though, there is bawdy humor and some period precise dance in some club numbers, a Charleston and Vaudeville dance comedy, for instance. Later, a drag number is performed by Dorsey’s transgender partner Shawna Virago, in a blinding red sequin, slit up the front gown, singing ‘Fever.’ Virago is backed up with some very snappy show dance- a dash of Fosse micro-moves and some homage to gay movie choreographer Jack Cole, who choreographed Marilyn Monroe and Judy Garland. And Dorsey’s character eventually takes the plunge and goes on a date that is a lyrical, male-erotic duet with Simonse, scored to a Bach cello solo.

Even when some of the episodes are sentimental or clichés that might seem to play into long held stereotypes, hissy and swishy lingo, for instance, it is all part of the larger scenario that includes a full range of coded gay cultural expression. It points up Dorsey’s commitment to ‘rescued’ history that might not be otherwise written for the dance stage if it were not for this project. He notes that everyone should record their history and experiences as GLBTQ Americans, since they often are not told in families, or through the heterosexual lens in most academic curricula.