Looking back at 2009’s top dance performances and events 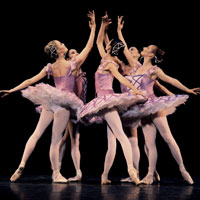 DANCE Looking back over a year’s dance performances feels like reading a horoscope backward. Were there surprises, disappointments, new loves, emerging trends, familiar encounters, and reasons for hope and despair? Of course. Perhaps the best part of this yearly exercise is that it allows works to bubble up that for one reason or another — quality, daring, perspective, innovation — stuck in the mind. You want to see them again. Some, you actually will. As for the not-that-again, forget-it, or please-don’t pieces, they already have sunk into the grand pool of oblivion. The following is a baker’s dozen of top picks, chosen roughly in the order in which they were seen.

Sean Dorsey’s dance-theater piece Lou, based on the writings of transgender pioneer Lou Sullivan and danced by Dorsey, Brian Fisher, Juan de la Rosa, and Nol Simonse, was a penetrating portrait of one man’s courage and lust for life. It also highlighted Dorsey’s increasingly fluid skill in fusing language and dance.

San Francisco Ballet’s most recent Swan Lake (to be reprised in January 2010) is an odd mix of traditional (the choreography) and edgy (the production). By using the bold design of a ballet neophyte, Broadway-credited Jonathan Fensom, Helgi Tomasson took a huge risk in offending traditionalists who like their swans pure. Danced fabulously well, this is a Swan Lake for our own time.

Pichet Klunchun and Myself was just a one-night stand, but what a night it was. To watch French super-theorist Jérôme Bel and classical Thai dancer Klunchun play their intellectual ping pong game about life, dance, culture, and everything in between was to watch two master performers at work.

Presented by the San Francisco Museum of Modern Art in conjunction with their exhibit on William Kentridge, The Return of Ulysses was Kentridge’s translation of Monteverdi’s jewel into puppet theater. The multiple perspectives on time and place and the exquisite cooperation between puppets and singers were awe-inspiring.

ODC/Dance — just because of who they are. Sometimes we tend to take established hometown companies for granted. Yet these dancers have never looked better. Additionally, both Brenda Way’s In the Memory of the Forest and KT Nelson’s Grassland overflowed with commanding and beautifully shaped ideas.

We know Heidi Schweiker best as an interpreter of other people’s choreography. That’s why it was so gratifying to see her first full evening of work. Dreams of Speaking showed a choreographer of intelligence, imagination, and a fine sense of craft.

Seen in a drizzly rain on a preview performance, Spirit of Place (to be reprised this spring), Anna Halprin’s tribute to husband Lawrence Halprin’s reimagined Stern Grove Theater, was a gorgeous response to a space where nature and art collaborate. The dancers looked like spirits emanating from this magisterial grass and granite environment.

Togetherness suits artistic and life partners Janice Garrett and Charles Moulton. For their second collaboration, The Illustrated Book of Invisible Stories (which returns in January 2010), they worked with two groups of completely different dancers. The result was mysterious, mesmerizing, and surprisingly fresh.

The big surprise at the San Francisco International Arts Festival was the extraordinarily skilled and theatrically vibrant The Angel and the Woodcutter, South Korea’s Cho-In Theatre’s eloquent retelling in movement of a popular Korean fairy tale. It deserved a larger audience.

Suzanne Farrell Ballet’s lecture-demonstration, The Balanchine Couple, served as a vivid reminder that Balanchine never ran out of ideas for pas de deux. The nine on this program could not have been more different — all of them first-rate. The program also brought home the painful truth that such finely detailed and musically phrased Balanchine interpretations are a rarity.

Sometimes it helps to look beyond the hook. The big deal about South African dancer Gregory Maqoma’s Beautiful Me was that he used material from three other (cooperating) artists for his own choreography. Fair enough, but what left this audience member speechless was the grace, virility, and technical and emotional virtuosity with which Maqoma realized this portrayal of self.

Finally, the Performing Diaspora Festival was an ambitious project “featuring traditional forms as a basis for experimentation and innovation.” It boasted an elaborate support structure of studio time, blogs, workshops, and symposia. In the two programs I saw, the work ranged from first rate to mediocre. Fortunately, this is a two-year project — so let’s toast to 2010.