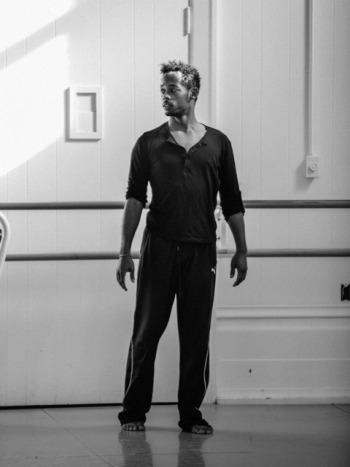 We are excited to announce the newest Company Member of Sean Dorsey Dance, ArVejon Jones! Born and raised in California, ArVejon has his roots deeply planted in the dance community here in SF. ArVejon joins Sean Dorsey Dance for the creation of the company’s newest work, The Missing Generation (world premiere May 14-17!).

ArVejon Jones was raised in Compton, California. His mother encouraged him to dance, hoping it would help with his weight and health issues as a child. He began taking Tap, Hip Hop, and West African at “Kennedy Universal Dance Designs” in Los Angeles, CA, of which he did for 13 years. He later moved to San Francisco to attend San Francisco State University, where he took his first ballet class. He later decided to double major in Dance and Japanese. ArVejon Jones has performed works by KT Nelson, Brenda Way, Kimi Okada, Kat Roman, Robert Moses, Ray Tadio, Dexandro Montolvo, Natasha Adorlee Johnson, Breton-Tyner Bryan, Raissa Simpson, among others. He was also an apprentice with ODC in 2012, which he had the opportunity to tour with the company. ArVejon has also performed in Atlanta with PUSH Dance Company. In fall of 2014, ArVejon had the amazing opportunity to be featured in “AM/FM,” a film that premiered at the San Francisco Dance Film Festival, choreographed by Robert Moses. On top of performing, he teaches group fitness classes at the Federal Court House and San Francisco State University. This is ArVejon’s first season with Sean Dorsey Dance.